This is a guest post by Kathryn Hemingway, one of IHR Digital’s summer interns from the University of Leicester. 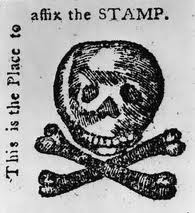 In attempting to create my first connection on Connected Histories, I chose the topic of the Stamp Act Crisis of 1765. It was my intention to choose a specific subject matter so that the resultant connection would not appear as a very long, insurmountable list of sources. I found that a search for “stamp act crisis” threw up a total of 57,871 matches across 10 resources. Deciding that was quite broad, I thought of narrowing it down further by creating several different connections relating to the Stamp Act – examples being the roles played by individuals during the crisis, with titles such as ‘The Stamp Act and George Grenville’ or ‘The Stamp Act and William Pitt’. Another idea would be to relate the subject to particular places, such as Massachusetts or New York. However, given that I had to undertake the work on my connection on the final day of my internship I opted to create a single connection rather than a series. Thinking along the lines of the reactions of certain provinces to the Stamp Act, a connection listing sources related to the history of the ‘Sons of Liberty’ came to mind. I conducted a search for “sons of liberty” specifying a date range of 1765 to 1776 which produced a more manageable 216 matches from 5 resources (though I also came across related sources outside of the date range through other searches, which appeared useful). Choosing this range is an attempt to generally cover the period in which they were a formal organisation. It is possible that people opposed to the same parliamentary acts but not officially affiliated with them were also referred to as ‘Sons of Liberty’.

Sifting through the results, I sought out the most relevant, useful and accessible sources while also trying to utilise a variety of websites. Most were obtained from the 17th and 18th century Burney Collection newspapers. The only difficulties I encountered with this particular resource were the repetition of some sources and occasional indecipherable transcriptions in the result descriptions. Although many of the sources in the connection require subscription, it does contain some interesting images from the British Museum and material from British History Online, both of which can be accessed for free.