The digital history of mathematics 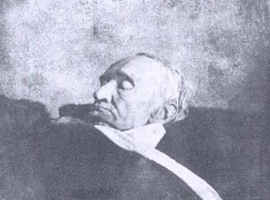 There is a joke among mathematicians that if you have an idea that no one has ever had before you should check, before publishing, that it’s not in Gauss’s papers. Gauss seems to have anticipated later findings across practically all areas of mathematics, yet he published relatively little; his notebooks remain a rich source of ideas. Many mathematical breakthroughs announced after Gauss’s death (see above for a post mortem daguerreotype) were, it turns out, privately pre-empted by the great man. In his reluctance to publish Gauss was similar to Newton: Newton’s failure to publish his invention of calculus led to a bitter feud with Leibniz which, it is generally agreed, had disastrous consequences for British mathematics.

But can you check the Gauss archive online? It’s not that I’ve had any brilliantly original mathematical ideas, but one might just come along at any minute.

Many readers of this blog will know that the Newton papers are all being published on the excellent Newton Project website. As well as his mathematical and scientific papers, you can read Newton’s famous forays into alchemy and Biblical scholarship. I have also been able to find the complete published works of Euler and Cauchy online, but no digital library of the works of Gauss, Hilbert or Cantor, let alone their manuscripts.

Unless I’m missing something (and please tell me in the comments if I am) the Newton Project currently stands alone as an online archive of a great mathematician, and an essential part of the history of ideas is currently being neglected in the digital age.