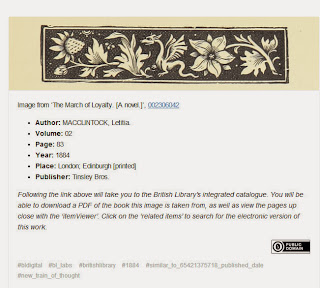 Some readers may already know the Mechanical Curator. This is a Tumblr account created by the British Library. The curator posts an image hourly, taken at random from the British Library’s digitised collections of books from the 17th to the 19th century.

The curator was created by Ben O’Steen and James Baker at British Library Labs. There is also a Twitter feed for each image.

I knew about the Mechanical Curator but when I went to a meeting at the BL last week James announced a recent update I didn’t know about. The curator now posts a link to the book from which the image is taken. The great thing about this is that, as James said, it opens up this little-known digitised collection to a wider public (the collection is integrated into the BL’s catalogue, which means that it’s harder to find than a discrete collection might be).

Best of all, the images are licensed under a Creative Commons Public Domain Dedication, which means that anyone is free to re-use these images for any purpose.