In the latest in our series of posts on the RCHME series, we have a guest post by Andrew Minting, conservation officer in Salisbury, about the importance of the Salibury volume. Andrew writes:

If there’s one source of information I commend to those researching the buildings of the city of Salisbury, it’s the Royal Commission’s volume on the historic monuments outside of the cathedral close. 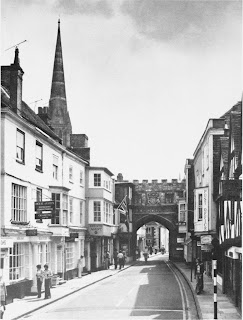 Its recent online publication is excellent news and makes the information much more readily accessible to the general public. The copy on my desk is well worn from use on a near-daily basis for many years, providing an understanding of individual buildings and the development of the city from its foundation.  As an historical record of the city in the mid twentieth century, it is invaluable, including buildings that had been demolished from the 1950s onwards.  In comparison with modern mapping, one can trace some of the dramatic redevelopments and losses of the last half-century – the extensive demolition to facilitate the ring road, the Old George and Cross Keys shopping malls, for example.  Many buildings are brought to life through excellent detailed drawings of their timber frames, such as the Plume of Feathers, while plans showing chronological development are particularly useful for those considering the sensitivity of sites to proposed alterations. 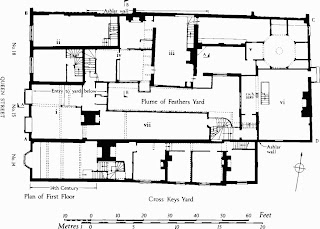 The introduction and footnotes provide very useful pointers to all of other primary and secondary sources available, many of which are now to be found at the Wiltshire and Swindon History Centre.

One important note for those unfamiliar with the hardback version of the volume, the planned grid layout of much of the city centre led to the adoption of names for the blocks of the grid, known as chequers, in addition to street names. Where appropriate, the Royal Commission organised the monuments of the volume by chequer, rather than following the lengths of individual streets.  Perhaps the most useful image for users of the online version is to be found in Plan 1, which shows both chequer and streetnames, although the Naish plan of 1716 is a beautiful alternative.