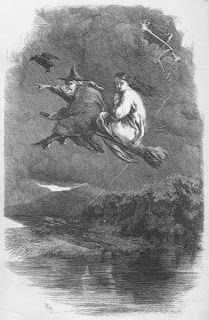 ‘They seem to have all died out’: witches and witchcraft in Lark Rise to Candleford and the English countryside, c.1830–1930. Thomas Waters

Flora Thompson’s account of the English countryside during the 1880s–1890s – Lark Rise to Candleford – continues to be an important source for rural history. In that text the protagonist’s mother says that witches had ‘all died out’, and none had been known in her generation. The informants of late Victorian folklorists sometimes made similar remarks. Historians have taken such statements about witchcraft being a thing of the past at face value, inferring from them that plebeian concern about its influence was disappearing during the final decades of the nineteenth century. This article uses evidence from the English south midlands, and insights provided by anthropological studies of sorcery, to suggest an alternative interpretation. Rather than being a sincere statement of belief, assertions that witches had ‘all died out’ were part of a strategy to avoid speaking about a dreaded subject. Such pains were taken because it was believed that talking about witchcraft was a dangerous activity that would lead to the bewitchment of anyone with a loose tongue.

And check out our other latest articles on Early View:

Bishops and deans: London and the province of Canterbury in the twelfth century.D. P. Johnson

Pressing the French and defending the Palmerstonian line: Lord William Hervey and The Times, 1846–8. Laurence Guymer