The International Journal for Maritime History [1] ran a special forum on a variety of projects, some new, some old and some in development. In Some implications from the Transatlantic slave trade for maritime databases, David Eltis discusses the development of the Trans-Atlantic Save Trade database. This database, launched in December 2008, comprises nearly 35,000 individual slaving expeditions between 1514 and 1866. The records are compiled from various archives and libraries and provide information about vessels, slaves, slave traders and ship owners. By using this data, Eltis hopes to chart the geographical origins of the slaves on the complementary site www.african-origins, launched in May 2011. He outlines plans for a photographic collection and ethnographic material. 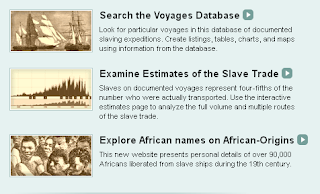 The slave trade database offers a variety of search facilities. The initially daunting search screen turns out to be remarkably easy to use and in a very short time I was able to establish the role of Cowes (yes, that Cowes, on the Isle of Wight) as a starting and end point for around ten slaving voyages dating from 1734. With such a well-established site there is the usual contextualisation of material and research materials as well as the ability to download material for particular research projects.

A more recent use of the slave database is a fascinating article, The speed of ships and shipping in the age of sail in the European Review of Economic History. Using a sample of vessels from the database the article shows that the speed of ships increased significantly.[2]

While the slave trade database has collated material from a variety of sources, the next project discussed uses one source – the Sound Toll Registers. The registers are an intriguing collection of data detailing the accounts of the toll which the king of Denmark levied on shipping which passed through the strait between Sweden and Denmark. The data covers the period 1497-1857, after which the toll was abolished. There are gaps in the sequence but the records are complete from 1574. The database will ultimately contain evidence for over 1 million voyages. Already the project has begun using the data in research and these are outlined in the article, Sound Toll Registers Online: introduction and first research examples. [3]

The forum rounds off with a discussion of the potential of the Navicorpus site, which aims to create a tool for capturing a wide variety of resources related to shipping and maritime trade. The article covers the types of fields and data needed, its development and testing.

It is heartening that well-established sites are providing the impetus and stimulus for other research projects and also heartening that the IJMH ran the forum as a result of a conference held at the French National Archives in Paris in May 2011.