At a recent IHR conference, IHR Digital gave a presentation on digital resources to a group of senior academics and budding historians from China. One of the discussions centred around the paucity of Chinese digital resources. Surprisingly within weeks, and rather like London double-decker buses, two resources came to my notice.

“Writing History in the Digital Age”: The new Qing history Project [1] is an introduction to the project and its digitisation of Qing archives – “the largest collaborative research endeavour” in China. The authors explain the background to the project, funding and the decision-making process. There then follows a detailed search example using “marriage”. Access is via http://www.historychina.net/ (all in Chinese).

The other resource (in English) is the North China Herald newspaper hosted by Brill and listed as one of the prime printed sources in any language for the history of the foreign presence in China from around 1850 to the 1940s. The newspaper was published in Shanghai, at the heart of China’s dealings with the Euro-American world and a city at the forefront of developments in Chinese politics, culture, education and the economy. It also acted as the official journal for British consular notifications, and announcements of the Shanghai Municipal Council; it is the first, and sometimes only, point of reference for information and comment on a range of foreign and Chinese activities. 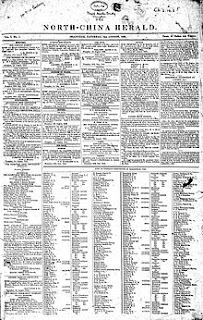 The first five pages of a randomly selected “issue of the day” can be viewed freely. The issue I looked at (4th March 1875) contained what I took to be the usual array of adverts (rather like the Times of the same date) with one warning prospective purchasers of Martell Brandy to buy only from “respectable Dealers”. There were also reports on the fabric trade; a new Chinese government loan; and a record of the meeting of the Shanghai Race Club.

If readers are aware of any other Chinese resources (in English or Chinese) I’d be happy to hear about them so that I’m more prepared for the next Anglo-Chinese conference.