Recently we published Volume One, Volume Two and Volume Three of RCHME, Herefordshire. Richard Wade, Archivist of the Herefordshire Archive Service, has kindly written this guest post for us, explaining the significance of these volumes:

The Inventory of Historical Monuments in Herefordshire

In 1908, The Royal Commission on Historical Monuments for England were appointed to undertake a massive project to survey all the pre-1714 buildings, monuments and architectural features surviving in England at the time. The survey is of immense value as it recorded buildings that existed prior to the destruction inflicted by the Second World War and subsequent reconstruction and development. They cover many diverse items including buildings from manor houses to churches, castles and city cottages and include features such as fireplaces, bells, chests, ceiling decorations, doors and porches and effigies. The work of the surveyors was compiled into published volumes. There are three volumes for Herefordshire, which were first published in 1931: volume one covers the South West of the County, volume two covers the North West of the county and volume three covers the east of the county. 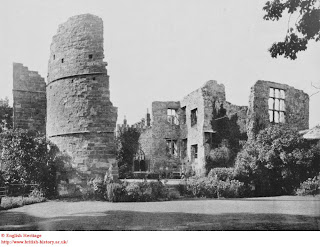 Unlike some counties, many of the buildings and features described still survive in Herefordshire. Hereford itself has the 17th Century Old House and the 15th Century Booth Hall and there is a Black and White trail around the north of the county where several of the villages, such as Dilwyn, are still predominantly still made up of Black and White Timbered Houses. There also several Iron Age Hill Forts around the county, such as those at Dinedor and Credenhill, which are described in detail in the volumes with diagrams. As many of the features have survived, the volumes form less of a record of what has been lost as in other counties. The inventories do however; still draw peoples’ attention to items that they perhaps know very well and maybe even walk past everyday without stopping to think about their history or significance. The inventories give detailed accounts of each parish with the monuments in it, highlighting those items of particular interest. They provide much background information to anybody wishing to visit these monuments, and in the case of churches for example, show plans of the churches and which parts of the churches date from which periods. The volumes also highlight features you may not otherwise necessarily see, such as capitals in the chancel arches in Garway and Rowlestone Churches. It is important that these features are described and people can appreciate them, when at the present time several churches and chapels have been made redundant and are difficult to access and others such as All Saints in Hereford now have Cafes in, which have dramatically changed their appearance inside. I am sure many developments have also taken place in some of the private homes that are described.

The area which has probably changed most is Hereford itself, and the volumes give information by street of all the pre-1714 buildings that existed at the time, many of which are no longer in existence and all of which there are brief histories given of.

Much attention is paid to the features of Hereford Cathedral, but there are also detailed notes on Dore Abbey and Croft Castle and the Feathers Hotel and Market Hall in Ledbury all feature.

As a result, the volumes are a valuable resource for anybody studying local or architectural history in the county and it is of great benefit to have them made available online.