Ellen Terry, Spheres of Influence and the Ellen Terry and Edith Craig Database 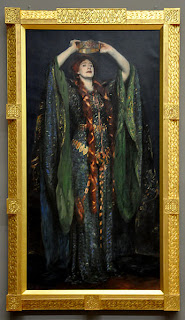 Pickering and Chatto have published the book, Ellen Terry, Spheres of Influence, a collection of essays that explores the influence of the actress as well as the cultural significance of her daughter Edith Craig (1869–1947) and her son Edward Gordon Craig (1872–1966), and includes references to Bram Stoker, Lewis Carroll and of course, Henry Irving.

The last two chapters are significant for researchers in theatre history and the Terry family and those interested in digital resources. Katharine Cockin (the editor of the volume) in her chapter, Ellen Terry: Preserving the Relics and Creating the Brand, outlines the history of the National Trust’s archive of more than 20,000 papers belonging to Terry and Edith Craig at their home Smallhythe Place, Tenterden. Described as one of the Britain’s most significant theatre archives, it is the result of Terry’s own selection of material for preservation during her lifetime, as well as the active collection by her daughter after Terry’s death.

Cockin, along with Julian Halliwell, in the next chapter, Describing the Ellen Terry and Edith Craig Archive, discuss the AHRC-funded Ellen Terry and Edith Craig Database Project and the resulting online guide to this catalogued archive and explores some of the features of the project, the development, design, and interface of the database, as well as providing a detailed summary of this significant archive.