In a previous blog I mentioned how Churchill has dominated historical writings and also mentioned that he had a journal devoted to him. Well now Churchill has his own online archive which is reviewed in Reviews in History. And so Churchill joins some of his successors in the digital age.

Perhaps the most striking and certainly most exhaustive is the website of  Margaret Thatcher. It claims to be the largest contemporary history site of its kind, offering free access to over 8,000 speeches and interviews as well as historical documents from The National Archives, American presidential libraries and Churchill College, Cambridge. The archive is usefully divided into date periods, such as 1925-1944 Early Life and 1970-1975 Cabinet Rank. There is a free text search facility and a useful browse function as well as searches by date and keyword. A comprehensive advanced search option allows users to pin down a specific speech such as the “lady’s nor for turning” 1980 conference speech. The contextual material details the source of the speech, when and where delivered, and notes that the 1980 speech was interrupted by a protester. Where available there are links to audio and video files. 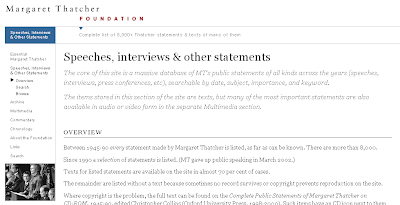 John Major too has his own site, which offers access to thousands of speeches and statements relating to both Major and the 1990-1997 Conservative government. As with Thatcher, there is a biography and a chronology of the key events of his premiership. You can browse the documents by date or use the search function. There is a note to the effect that this is a temporary site “with the function of making available key speeches and statements for research or general interest”. The site also notes that there is a permanent, more comprehensive and multi-media site due to be launched next year [2013]. 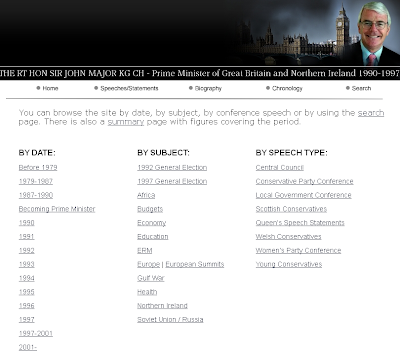 The subsequent Labour prime minsters also have their own websites, however these seem far more promotional rather than historic. Tony Blair’s site is professional and slick as one would expect from probably the most media-savvy of all politicians. The site is labelled “The office of Tony Blair” and comes across as advertising all Blair’s charities and political works. There is no archive, the earliest speech on the site is dated 2007 and there is a short biography which concludes with “50 Achievements of the Labour Party in government under Prime Minister Tony Blair”. The site seems to be more about maintaining his legacy than offering useful material for historians.

“The office of Gordon & Sarah Brown” hosts Gordon Brown’s site: again a promotional site with little for historians. It is interesting that there is very little reference to his time as prime minister and is certainly geared up to “Gordon Brown’s activities since leaving Downing Street in May 2010.” This is very much a working politician’s site with links to their (Gordon and Sarah’s) campaigns and to his constituency website.

An interesting addition to politician’s websites is one for Enoch Powell. The site presents the speeches of Enoch Powell in the hope that it will lead to a re-evaluation of his life and work. The archive includes the scanned original speeches (often with Powell’s annotations) from 1957 to1995. The speeches are divided by decade. Although users can search the speeches for a particular word, one has to access each separate batch of speeches in order to do so. There is an index to the speeches (as a PDF) but there are no hyperlinks to the text. One needs to note the date of the speech and then look for it in a particular decade. Rightly or wrongly, Powell will be remembered for the “rivers of blood” speech. Trying to find the speech on the site is no easy task. It helps if you know that the speech took place on the 20th April 1968 and a simple word search for “rivers” will happily find the speech. (The PDF index has the speech listed incorrectly under the 28th). 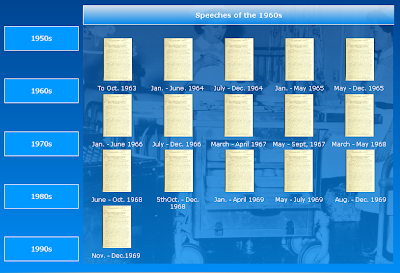 For a full listing of all prime ministers, with portraits, biography, major acts and terms of office, the official No. 10 site – Past prime minsters  – is very useful.