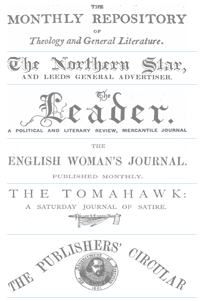 A recent issue of Media History has a special issue simply entitled “Ephemera”. The essays outline various justifications for the value of ephemera for historical research, covering such subjects as American humour in the late-Victorian British press, agony aunt columns, and personal advertisements in the New York Herald. The issue is topped and tailed by two contrasting, albeit complementary, articles. The longevity of “ephemera”: Library editions of nineteenth-century periodicals and newspapers, by Laurel Brake, looks at the formats through which the nineteenth-century newspapers and magazines have survived to the present, while James Mussell’s, The passing of print: Digitising ephemera and the ephemerality of the digital, considers the status of ephemera in material and digital environments. Both articles examine the ways archiving and digitization create questions about selection, preservation and access to the material.

Both Brake and Mussell are connected to the The Nineteenth-century Serials Edition (ncse) – a free, online edition of six nineteenth-century periodicals and newspapers including the Chartist The Northern Star and the politically radical The Leader (1850-1859): an apposite digital resource for researchers to explore ephemera.

Image from the Nineteenth-century Serials Edition.