The shock of the old 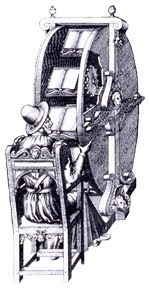 When I worked for EEBO-TCP it seemed to me that many features of early printing were replicated on early websites. The to-and-fro of intemperate bloggers, responding angrily to each other’s posts, reminded me of the equally intemperate pamphlet wars that I worked on for EEBO. There are bound to be similarities: new technology for publishing must initiate a period of flux before conventions crystallise. It’s easy to look back and say, of early books, “why didn’t they use quotation marks to indicate quotations?” or, of early websites, “why did they think titles that flash on and off were a good idea?” But we’re in another such period now, with smart phones and tablets requiring new conventions for publishing.

Another obvious similarity is that ‘proper’ authors tended to disdain the new medium. In academia there is still more cachet attached to publishing an article in a print journal, or a monograph with a traditional publisher, than to online journals or self-publishing a monograph on the web. Very early books were often made to look as much like manuscripts as possible, with space left by the printer for subsequent illumination by hand, and even for historiated initial letters. In Britain preference for manuscript publication persisted till the Civil War – although Harold Love, in his classic study, points out that

As late as the nineteenth century the cultural role of scribal publication was still an important one. During the lifetime of Gerard Manley Hopkins his writings were distributed in a manner not essentially different from that employed by Orinda in the seventeenth century…with only the occasional appearance in print.
Harold Love, Scribal Publication in Seventeenth-Century England, p.287)

I learned more about the parallels between the web and early printing when I came across The Renaissance Computer: Knowledge Technology in the First Age of Print: From the Book to the Web. One thing this essay collection emphasises is the importance of the ideal of retrieval: the desire to be able to search and find parts of a text quickly. This quest spawned the range of textual apparatus that soon became standard: indexes, alphabetisation, marginal notes, as well as the impressive book wheel pictured above.

The essay by Thomas Corns, ‘The Early Modern Search Engine’, points out that the Geneva Bible was a text which some found a little too accessible: James I’s motivation for producing a new Bible was partly to replace the Geneva version, with its handy but potentially subversive marginal notes. James stipulated that the new publication should have no marginal notes.

There was an anxiety that these new tools, like writing itself, would impair the memory. More recently concern has also been expressed in some quarters about the effect of the internet on our brains. This is related to the parallel, drawn by Leah S. Marcus, in the unease created by new technology:

There is a strong correlation between our own cultural moment, in which digital technology has been partially assimilated but is still alienating to many, and the first century and a half of printing, during which many readers experienced that new technology as similarly alienating and detatched from human concerns.
‘The Silence of the Archive’, in Rhodes and Sawday (eds.), The Renaissance Computer, p.22

The Renaissance Computer came out in 2000, before sites like Tumblr, Instapaper or Evernote existed. But when the editors talk about commonplace books in the digital age the parallel now seems even more exact. We may be ever closer to the ideal of instant retrieval that Renaissance scholars dreamed of, but we should recognise that new technology will always be alienating to some, and worrisome to others.