The value of objects 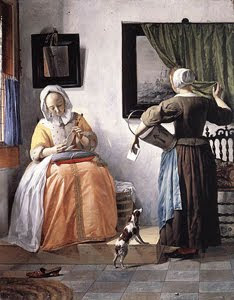 A few weeks ago I was walking through the Dutch rooms in the Ashmolean Museum in Oxford when, to my great surprise, I found myself standing in front of a painting by Vermeer. There are only five Vermeer paintings held in collections in Great Britain, and this wasn’t one of them. It turned out that the picture, the only Vermeer in private hands, had just arrived on loan from a collector in New York, as the large label delightedly announced. (If you want to see it, it will be there till September.)

Adjacent to the Vermeer was a painting by his contemporary, Gabriel Metsu. It’s hard to imagine any museum making much of a fuss about having a Metsu. Yet Vermeer and Metsu were in many ways similar painters; they influenced each other and borrowed compositional ideas from each other; both died relatively young (in 1675 and 1667 respectively). The painting at the top right, Lady Reading a Letter, shows Metsu’s style at its most similar to Vermeer.

For 200 years after their deaths Vermeer maintained a modest reputation, but Metsu was one of the most sought-after of all Dutch painters. In an essay suggestively titled ‘Why buy a Vermeer when a Metsu is available?’, Adriaan Waiboer details some of the extravagant prices paid for Metsu by European royalty, while Vermeer’s pictures often sold because they were thought to be by other painters.

For example, in John Smith’s catalogue of “the Most Eminent Dutch, Flemish and French Painters” (1829-42), Waiboer tells us, Vermeer does not have an entry; but he does crop up in the entry for Metsu, under “scholars and imitators”.

Things changed in the late nineteenth century. Critics began to re-evaluate Vermeer. Proust’s Charles Swann, a man of impeccable taste, is writing a study of Vermeer. In the 1880s that would have put him at the forefront of connoisseurship. Metsu’s reputation went into decline.

Why was this? Waiboer has a tentative theory:

our preference for the Delft painter’s clean and harmonious compositions over Metsu’s busier, more opulent scenes says more about our taste than the artists’ paintings. It reflects our modern penchant for streamlined and stylised aesthetic; as evidenced by contemporary design and architecture. In the seventeeth century, painters were advised to furnish their works with a ‘decorating richness’ of objects, as this was highly appreciated by collectors and such paintings were easier to sell.
[‘Why buy a Vermeer when a Metsu is available?’, p.50, in Waiboer et al, Gabriel Metsu]

This sounds plausible, although there are, of course, plenty of objects in Vermeer’s paintings too. Timothy Brook, a historian of China, has written a fascinating book, Vermeer’s Hat, about the world trade conditions that led all these objects to end up in Delft in the 1660s. Nevertheless, there is something uncluttered about Vermeer’s interiors. So the question, then, is what changed in our relationship with objects to make us want less of them in pictures?

In the west, between 1660 and, say, the ‘rediscovery’ of Vermeer in 1866, industrialisation made it far cheaper for ordinary people to own things. Transfer printing, the Jacquard loom and aniline dyes, among many other inventions, made it possible for ordinary people to own brightly coloured, highly patterned things; one reaction was the Arts and Crafts movement, which derided mass production. The twentieth century, which saw the rise and rise of Vermeer, only continued the trend; one reaction was for the rich to have minimalist interiors, and the middle classes to wish they had more minimalist interiors.

Wondering if I could substantiate this vague correlation, I searched the Bibliography of British and Irish History for “consumption and demand” AND “social history” AND “household and personal goods”, between the dates 1660 and 2000. This gave me 35 hits. One of them was for a book I actually own but hadn’t got round to reading: Household Gods: the British and their Possessions, by Deborah Cohen. Naturally this book has a wealth of information on all kinds of topics (the effect of Oscar Wilde’s trial on home furnishings, for example), but what I found most intriguing was Cohen’s exploration of the haunted house phenomenon, which she links to dissatisfaction with the cluttered domestic interior:

Unless one could make a clean sweep of it – and even then the ghost story promised no happy ending – the past filled the material world. Most people, even those who wanted nothing to do with antiques, inevitably lived in houses surrounded by objects given and inherited.
[p.167]

In some ways the tide has turned as the nature of ownership has changed. We can declutter by having our music on Spotify, our films on Netflix, and our books on an e-reader. If our urge to collect is in conflict with our urge to simplify we can start an account with Pinterest and express our love of hand tools, beetles or Wham! memorabilia without cluttering up the spare room.

Admittedly, Pinterest seems to be driving a lot of traffic to commercial sites, so it can’t be all virtual collecting. Still, if the trend towards the digitisation of commodities is set to continue, maybe Gabriel Metusu and his decorating richness of objects will concomitantly come back into favour. Although I notice that if you search Pinterest for ‘Vermeer’ you get thousands of results, and if you search for ‘Metsu’ you get four.