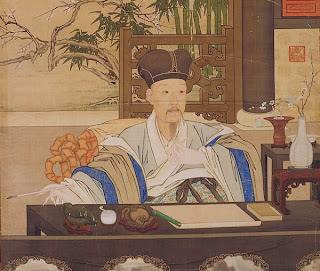 Whenever someone asks me who is my favourite Chinese emperor I always reply, “Qianlong, who else?” Like other early Qing emperors, Qianlong was a fanatical antiquarian and collected and preserved countless cultural artefacts from China’s past, which today are largely split between museums in Beijing and Taipei. Such was the obsession with the past that many pieces of porcelain made for Qianlong have spurious reign marks, claiming that they were made under various emperors of the Ming dynasty. Historians tend to say that this practice was pious rather than deceptive.

Qianlong abdicated as emperor in 1796. He had reigned for 60 years and was about to overtake his grandfather’s record as the longest-reigning Chinese emperor, which he declined to do (he still kept hold of power, though – was that deceptive or pious?).

Today another monarch clocks up a reign of 60 years. To mark the occasion my colleagues in the Victoria County History have rededicated all future red books, such as Essex, Volume XI and Yorkshire East Riding, Volume IX, to Elizabeth II. In celebration of this Diamond Jubilee year, the VCH will publish an account of its history since 1899, focusing on topics such as the early foundation of the project; women’s role within the History; and the more recent, successful HLF project England’s Past for Everyone.

Elizabeth II is not the longest-reigning monarch in the world, a record currently held (according to this list) by the King of Thailand. However in three years and 217 days the Queen would overtake the domestic record of her great-great-grandmother, Victoria. Will she abdicate in an act of filial piety to let Victoria keep the honour?