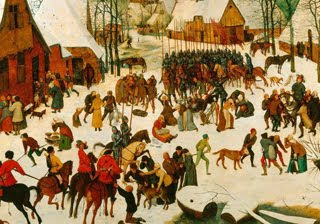 The Christmas story is a violent one, at least according to the account in Matthew’s gospel:

When Herod realized that he had been outwitted by the Magi, he was furious, and he gave orders to kill all the boys in Bethlehem and its vicinity who were two years old and under, in accordance with the time he had learned from the Magi.
Matthew II.16, New International Version

In time for the Christmas season the IHR Digital office has received a book for review by Robert Muchembled, called A History of Violence. My colleague, Danny Millum, has managed to get this book reviewed alongside Steven Pinker’s The Better Angels of Our Nature for Reviews in History, and the conjunction should provide a fascinating article to read next year. The thesis of Muchembled’s book seems to be similar to Pinker’s: that there has been a marked decline in violence since the twelfth century. In fairness to Muchembled, I should mention that his book was originally published in 2008 as Une histoire de la violence.

Since violence has been something of a theme of my blog posts on English Historical Documents, I thought it would be appropriately festive to mention an incident that occurred in Acton Scott, in Shropshire, on Christmas Day 1287, between John de Quercubus and Hugh de Weston:

after sunset there were some men singing outside a tavern kept by Richard son of William de Skottesacton in that town. And Hugh came by the door immensely drunk and quarrelled with the singers. Now John was standing by, singing, and Hugh hated him a little because he sang well…so Hugh took a naked sword in his hand and ran at John, striking him once, twice, thrice, on the head, and nearly cutting off two fingers of his left hand. And John…ran into a corner near the street under a stone wall. And Hugh ran after him and tried to kill him, so he drew his knife and wounded Hugh in the chest, killing him instantly.
English Historical Documents, Volume 3, document 198.

Merry Christmas one and all!