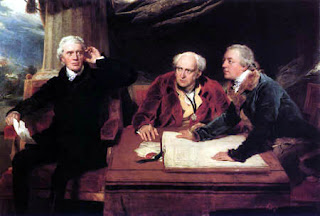 The recent bank bail-out is still fresh in the public mind, as shown by the Occupy London campaign. A look at volume XII(2) of English Historical Documents reveals that bank bail-outs are nothing new. Document 62 is an article in The Economist from December 1890, in which the Stock Exchange thanks the Bank of England for preventing the collapse of Barings.

Barings had been overexposed to sovereign debt – does any of this sound familiar? The previous month The Economist had said something that might have come from Occupy London:

It is, indeed, a pity that such a great house should have been brought low, but it would have been still more to be regretted if the punishment for the errors which have been committed should have fallen, not upon those responsible for them, but upon innocent parties.
[Volume XII(2), document 61]

Barings was saved…until it was brought down in 1995 by the massive losses of a trader gambling on the futures market.

The UK National Debt (which began before the UK itself, in the middle of the seventeenth century) currently stands at £594.5 billion, according to Wolfram Alpha. It wasn’t quite so high in the reign of Charles II, but in 1672 the king decided to ‘stop the Exchequer’ – which meant that he refused to pay his private creditors (EHD, volume 8, document 128).

Richard Langhorne, a barrister later executed in the response to the ‘Popish Plot’, wrote to Lord Hatton that “his Majesty sent to the bankers in Lombard Street to advance a considerable sum of present moneys”. Owing money to the bankers of Lombard Street is the origin of the phrase “to be in lumber”. In stopping payment to the bankers, Langhorne concluded: “I believe it certain that the trade of bankers is totally destroyed” (Volume 8, document 129).

Langhorne’s prediction was wrong, and the country’s public finances are still in lumber.