A Novel Approaches prelude (7): The first phase of Historical Novels: Don Carlos, Montpensier and The Princess of Cleves 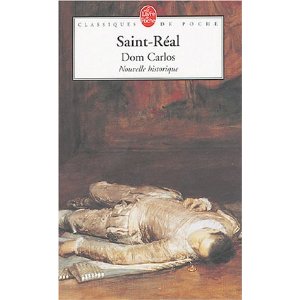 In 1671 César de Saint-Réal published a treatise on secret history entitled Traités historiques de l’ usage de l’ histoire.  The treatise proposed that individual psychology and human motives causes historical processes to take on their form.  One year later he published his semi-fictional story Don Carlos in part as demonstration of his take on Secret history.  Saint-Réal (1639-1692) rose through the court of Louis XIV during the 1660s in the role of historian and book cataloguer and became a relatively popular writer.  Don Carlos was a novel about the heir to the Spanish throne who fell in love with his father’s bride, Elisabeth of France.  This flirtation soon turns into plot as the lovers become instruments in a game of power that hinges on their own actions.  Indeed, a key plot point revolves around a few unthinking remarks on behalf of the protagonists – an indication of Secret history as the primary causation of historical occurrence.
Madame de Lafayette’s novels provide more of a mixture of Secret and Particular history.  In The Princess of Cleves we are brought to the court of Henri II through the tale of Cleves, a naïve heiress who is married off to the prince of Cleves.  However, Cleves soon finds herself at the attention of the Duc de Nemours and a love triangle quickly ensues.  In her first novel, Montpensier, Lafayette treats us to a relatively similar story.  This time we follow the Count of Chabannes at the time of the St. Bartholomew’s Day massacre of 1572.  The story begins a little before the massacre.  Chabannes is friends with the prince-dauphin de Montpensier who has just got married.  When Montpensier goes to war, Chabannes and Montpensier’s newlywed wife begin an affair which is, of course, eventually discovered. 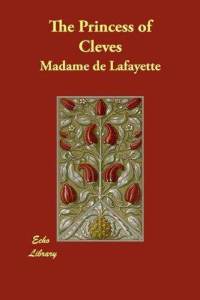 All of the characters in Montpensier are in one way or another connected to the wider historical setting of Catholics verses Protestants.  Chabannes himself is a former Huguenot who has converted to Catholicism to be near to his friend Montpensier.  When discovered by Montpensier in his wife’s’ apartment, Chabannes goes into hiding and, as an ex-Huguenot is slaughtered during the massacre.  However, the real purpose of setting the story during this turbulent time in French history was to explore the exploits of court intrigue during the time of the infamous Catherine de’ Medici.
This ‘first phase’ then of historical novelisation came out of French historiography prevalent at the time.  When the genre came over to England it was largely in the form of English translations of Lafayette and other French novelists.  Sir Walter Scott was one of the first, in England, to adapt the genre to his own uses but he did this in a way that brought the genre up-to-date and in the process, reformed the entire genre into a new, more popular form.  The question still remains however; in what way is Scott’s Waverley and other nineteenth century historical fiction distinctly different to what had come before?  How could Georg Lukács claim the origins of this genre lay over a century after Lafayette and her contemporaries?  I will look into this question on Friday.
Bibliography
Richard Maxwell, The historical Novel in Europe, 1650-1950 (Cambridge University Press: Cambridge, 2009).
For information about the virtual conference please click the banner below.