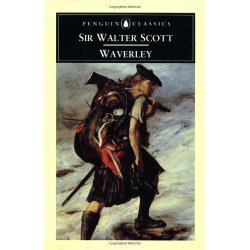 Waverley is not a book ‘merely for amusement’ as Sir Walter Scott himself tells us but one designed to make the story ‘intelligible’, through a knowledge and learning of past events, culture and politics.  Thus Scott begs pardon for ‘plaguing them [his readers] so long with old-fashioned politics, and Whig and Tory, and Hanoverians and Jacobites’.  Why?  Well Scott explains:

“My plan requires that I should explain the motives on which its action proceeded; and these motives necessarily arose from the feelings, prejudices, and parties, of the times.  I do not invite my fair readers, whose sex and impatience give them the greatest right to complain of these circumstances, into a flying chariot drawn by hyppogriffs, or moved by enchantment.  Mine is a humble English post-chaise, drawn upon four wheels, and keeping his majesty’s highway.  Those who dislike the vehicle may leave it at the next halt, and wait for the conveyance of Prince Hussein’s tapestry, or Malek the Weaver’s flying sentry-box.” (Scott, p. 24).

Beyond Scott’s assumptions about the interests of female readers, is a claim by Scott not to be writing for all interests.  This is a novel intended to instruct his readers about past politics not a fantasy adventure.  The alternative title of Waverley is Tis sixty years since.  It is an apt title in that it explains to the reader that this story is historical and set sixty years before the present (or more precisely sixty years before 1 November 1805).  Indeed the narrative often delves into the nuances of the period and at times explains the differences between present and past directly.  For instance, at the point when the main protagonist of the novel, Edward Waveley leaves home for the Highlands his aunt ‘gave the young officer, as a pledge of her regard, a valuable diamond ring’ (Scott, p. 30).  Scott then explains to the reader that diamond rings were ‘frequently worn by the male sex at that time’ as were ‘a purse of broad gold pieces’.  A few pages later Scott provided another example when describing the Scottish village of Tully-Veolan:

‘The village was more than a half a mile long, the cottages being irregularly divided from each other by gardens, or yards, as the inhabitants called them, of different sizes, where (for it is Sixty Years since) the now universal potatoe was unknown, but which were stored with gigantic plants of kale or coleword, encircled with groves of nettles, and here and there a huge hemlock, or the national thistle, overshadowing a quarter of the petty inclosure.’ (Scott, p. 34).

Scott’s novel therefore used his setting of the past as a means to convey change amongst other historical processes.  On Friday I will continue this discussion by refocusing on how this past world is conceptualised by Scott.
Bibliography
Claire Lamont (ed.), Sir Walter Scott Waverley; or, ‘Tis Sixty Years Since (Oxford University Press: Oxford, New York, 1986).
For information about the virtual conference please click the banner below.