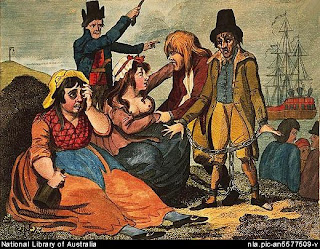 In an earlier post about the sexual mores on board transportation ships, I wondered what might have happened to the women when they arrived in New South Wales. Some of them undoubtedly were pregnant but presumably all the sailors they had partnered with during the voyage would be returning to the northern hemisphere.

In continuing my work on English Historical Documents I soon found some interesting direct evidence. Document 503 in Volume XI (1783-1832) is a letter from just such a women transportee, then in Port Jackson:

As for the distresses of the women, they are past description, as they are deprived of tea and other things they were indulged in, during the voyage, by the seamen

Then we learn that, although some sailors seem to have done the decent thing, others did the more predictable thing:

though a number of marriages have taken place, several women who became pregnant on the voyage, and are since left by their partners, who have returned to England, are not likely even here to form an fresh connections.

An interesting additional point is that letters home were clearly censored:

All our letters are examined by an officer; but a friend takes this for me privately. The ships sail tonight.

Perhaps this censorship has affected the quality of the evidence on the fate of women convicts in Australia, but we are lucky that this clandestine letter has survived.