Three Godfrey of Boullions in one day 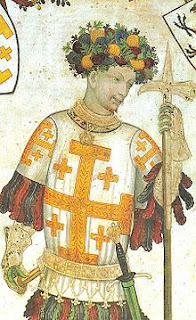 A colleague is working on English Historical Documents and came across the name of Godfrey of Boullion in the context of Caxton’s publications. In Caxton defends the historicity of King Arthur (1485), Caxton, in his preface to Malory’s King Arthur, outlines his “nine worthies” including Godfrey, “…whose acts and life I made a book for the excellent prince and king of noble memory King Edward IV.” We discussed why Godfrey was in the company of such other “worthies” as King Arthur, Julius Caesar, Alexander the Great, and Charlemagne.

Later the same day, while checking articles for inclusion in the Bibliography of British and Irish History, I came across the article Guy of Warwick, Godfrey of Bouillon, and Elizabethan Repertory in the journal Early Theatre. The article is about the interaction between England the Ottoman Empire and the depiction of Islam as shown in drama. It includes a discussion of the Thomas Heywood play The Four Prentices of London, a play about Godfrey, his family, and the pilgrimage and crusade to Jerusalem.

Later the same day the IHR Director’s seminars listing was circulated and, you’ve guessed it, Godfrey appears again, this time in a seminar – Godfrey of Bouillon: the development of a First Crusade hero, c. 1100–1325.