Indian summers in the sources 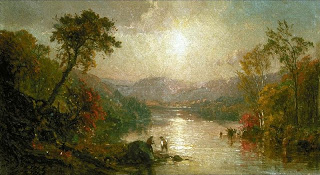 Intriguingly, a search of Connected Histories reveals only 34 references to the term ‘Indian summer’ (and that from an estimated 5.6 billion words and 140,000 images relating to British history from 1500 to 1900). The reference in the Old Bailey Online is simply to a summer in India, and this may also be the case for the single reference in the John Johnson Collection of Printed Ephemera (the title of a short story in a Table of Contents). The other 32 references are contained in the House of Commons Parliamentary Papers.

It is often mistakenly believed, in the UK at least, that the term refers to the Indian subcontinent, but the ‘Indian’ in question is in fact Native American. The first reference in the Parliamentary Papers (drawn from ‘Reports of progress, together with a preliminary and general report, on the Assinniboine and Saskatchewan exploring expedition’ (1860)) yields the following rather lyrical explanation:

Indian summer is a phenomenon of constant yearly occurrence and marked characteristics in the north-west … the hazy, warm, mellow weather we term Indian summer is a periodical phenomenon in Canada, but the cause does not appear to be quite understood. The characteristics of Indian summer are more decided in the north-west than in the neighbourhood of Lake Ontario. Sounds are distinctly audible at great distances; objects are difficult to discern unless close at hand; the weather is warm and oppressive, the atmosphere hazy and calm, and every object appears to wear a tranquil and drowsy aspect.

This is followed by a table providing data for the incidence of Indian summer in Toronto from 1840 to 1859 inclusive – it apparently lasted for between four and 11 days each year.

Closer investigation reveals that only 13 of the references in the Parliamentary Papers (five from this one report) are directly relevant, and I’ve saved them as a ‘Connection’ here. The short descriptions are evocative of British officials and explorers enjoying welcome relief from extremes of temperature (in both summer and winter) to which they would have been unused:

… mornings are pleasant but cool, and a fire becomes agreeable. This period is termed all over America, the “Indian summer,” and is always looked for, and depended on, as the time to make preparations for the winter season.

The summer heats for a brief season are excessive, vegetation is singularly rapid, and the autumn, which includes the Indian summer, is delightful.

Cold, bleak, misty days followed till the 18th, when the balmy enjoyable weather known as the Indian Summer commenced, and continued till the close of the month …

The first reference to ‘Indian summer’ provided by the OED online dates from 1794 (Ebenezer Denny, Military Journal of Major Ebenezer Denny, an officer in the Revolutionary and Indian Wars. With an introductory memoir. By William H. Denny (1860)), so it is surprising not to see it occur more frequently in Connected Histories. The fact that it deals solely with British rather than American source material is clearly a factor. The Google Books ngram viewer suggests a slightly different picture. There is relatively high incidence of the term in the period 1800-20 (although at least some of these may well refer to summer in India, as noted above) and smaller peaks at intervals throughout the 19th century. However, even here it’s not until the 1970s and 80s that things really take off. Today, ‘Indian summer’ is a staple of newspaper headlines and television weather reports, and will be used many more times before the end of this balmy week in the UK.