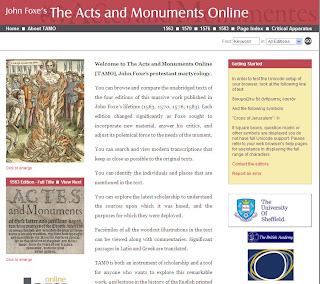 On 18 July 2011 a new edition of John Foxe’s seminal Acts and Monuments (more commonly called Foxe’s Book of Martyrs) was published by the Humanities Research Institute (University of Sheffield) as a fully developed online searchable edition. The Acts and Monuments is well known as a polemical martyrology detailing the burnings of Protestants by the government of Queen Mary during the 1550s. One can fairly go as far as to claim that Foxe helped to build an image of the English Reformation and of English Protestantism that survives in some form to this day. At the very least Foxe can certainly be credited for creating the enduring image of ‘Bloody’ Mary.

The John Foxe Project began life 20 years ago and was initially intended as a new printed edition before becoming a CD ROM and then finally redeveloped as a website. That website went live in 2004 but it was only partially complete and has, for many years, looked rather outdated. This new edition then is a great achievement as it offers researchers, for the first time, the opportunity to study in full all four editions of Foxe’s book produced in his lifetime. The project has already helped to re-evaluate our understanding of sixteenth-century England and its re-launch promises even more exciting prospects for research and learning in the future.

Previous to coming to work for the IHR I was fortunate to have my PhD attached to the Foxe Project and to be able to contribute a small role to the development of the website during its final stages. I therefore owe a lot to the project and to its team of contributors. I can safely say that my topic could not have been studied without the searchable online editions that were then available. This new edition makes even more analysis possible. I am personally very excited by the possibilities that this brings to my research and to what I might learn from others making use of the website. Foxe’s text is such an essential one for studies of the English reformation and for Tudor England as a whole.