The Local Historian and the internet 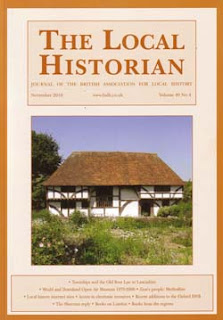 The 2010 November issue of The Local Historian has an article by Jacquelené Fillmore entitled, Local history internet sites: an update for 2010. She has helpfully published a series of such articles since 2007 (see volumes and issues, 37:3; 38:3, 39:1 and 39:3). As she points out, “The quantity of local history resources available on the internet seems to increase exponentially, and their importance as a research tool becomes ever more apparent.” She also emphasises that, “… many local historians regard it [the internet] as a major contribution to their work.”

There is also a ‘companion piece’ by Gillian Draper – Connect to the Native Interface: access to electronic resources and websites for independent scholars – in which she discusses the trend towards charging for, or limiting access to, websites. Rather than bemoaning the fact that some resources charge for access, she offers some excellent advice on alternative routes to such resources and draws users’ attention to a number of valuable sites which remain cost free. Usefully, she also outlines how local historians and independent scholars may exploit the opportunities presented by their local universities.