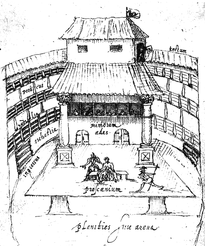 1642 was a significant year for the English Renaissance Theatre – it closed!. “Public Stage Plays shall cease, and be forborn, instead of which are recommended to the People of this Land the profitable and seasonable considerations of Repentance, Reconciliation, and Peace with God”.

However Early Modern London Theatres (EMLoT) brings this age of theatre back to life. It is a research database and educational resource that grew out of a collaboration between the Records of Early English Drama (REED) at the University of Toronto, the Centre for Computing in the Humanities (CCH) at King’s College London, and the Department of English at the University of Southampton. The core function of the database is to show how information produced at the time of the early London theatres was transmitted in later years – it only includes those events that were written about before 1642 in documents if they were also recopied and used by others after 1642.
The database describes where relevant information about the early London theatres can be found in primary and secondary sources, and it describes each source, so that you can cite all its publication details. This includes its original title and how it is now known; its author(s); where it can be consulted in full, including its presence in any digitised collection; and whether it is now lost or can be considered a forgery. What make EMLoT extra special and an extraordinary research tool is the linking up of all the categories and sub-categories of its sources, and of the information they contain. The database enables you to explore, starting from anywhere in the records and discovering how pieces of information are related.
Perhaps the best way to understand the site is to use the excellent tutorial. This shows historical ‘knowledge’ in the making. Using a specific historical occurrence – the 1617 riots which affected the Phoenix Theatre – as a case study. The tutorial traces how this event was represented in a succession of documents from just after the riot until the 20th century. The graphic representation of the historical use of the documents in a timeline is easily understood and there are links to other parts of the database and to original documents and translations. (Helpful hints in using the tutorial – use the ‘close button’ rather than the back key to return to the timeline; double click on icons; and although the timeline notes indicate that they are clickable and should lead to further documentation they do not). The tutorial is the basis for six other projects which can be undertaken in the classroom including:- a 1611 court case featuring the actor John Newton; a livery record for James I’s entry in London, 1604; and various anti-theatrical polemics, 1570s-1640s.
Happily EMLoT will continue to be developed by REED. Future developments will include the addition of information for the theatres on the South Bank of the Thames. Although the database does not include play texts, ultimately the play text and sources developed by REED will be linked to the site.