Serendipitous discoveries – from Conservatism to Fabianism

Part of the joy of searching the internet is the serendipitous discovery of new resources. While searching for some reference to the Gerard Du Maurier play An Englishman’s Home (1909) I came across a mention of the Conservative Party Archive and its poster collection. Intrigued, I followed the link to discover 596 Conservative campaign posters from 1886 to 2007. (You may need some patience and perseverance as the database loads). You can search by category, date and keyword (in each case a useful list of terms appears). The posters appear as thumbnails which can easily be sorted, scanned and made larger. The collection is a rich and stimulating visual resource for the study of the political issues of the 20th and early 21st centuries, and is continually being added to with transfers from Conservative Campaign Headquarters. The site states that, “Users are welcome to download these images for their own or any other non-commercial purpose without requesting further permission, provided the source is given as ‘Conservative Party Archive’ and the shelfmark cited (eg, Poster 1987-06).” In the case of the An Englishman’s Home poster (above left) the reference is CPA Poster 1909 10-21. There is little contextual material for the posters save the date and brief campaign details. Commercial usage is available via GettyImages: although searching is a little more difficult there seems to be more contextual material. 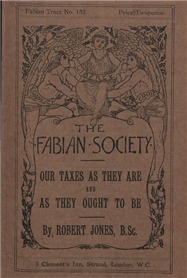 Discovering the Conservative Party posters led me to seek out other parties’ posters. The Labour Party archives are held by the People’s Museum which houses the Labour History Archive and Study Centre (LHASC), the main specialist repository for research into the political wing of the labour movement. It also holds the archives of working-class organisations from the Chartists to New Labour, including the Labour Party and the Communist Party of Great Britain. Sadly there is no systematic online collection of posters. However a search under ‘Our collections’, ‘Search our collection’ and entering ‘posters’ as a keyword brings up a smattering of Labour Party posters.

The Liberal party archives are held by the London School of Economics. Although this collection holds no posters I discovered the Fabian Archive which contains around 580 Fabian tracts as well as a number of early minute books of the Society. The tracts date from 1884 to 1997 and cover a huge range of topics. For example, the earlier tracts debate the nature of socialism, campaigns for better working conditions (such as an eight-hour working day), and detail hopes for better living conditions through increased local government. Many of these early tracts were written by LSE founders George Bernard Shaw and Sidney Webb. The tracts come as PDFs. There is an author and date index and it’s relatively easy to scan down the titles and gauge the range and subject content of material. The tracts are subdivided by decade and scanning a list brings up the following interesting polemics, The Education Act 1902 and how to make the best of it by Sidney Webb; The Case for Nursery Schools (1909) by Mrs Townshend, The Nationalization of Mines and Minerals Bill (1913) by Henry H. Schloesser; and Germany and the League of Nations (1924) by Hermann Kantorowicz.