I recently went to the Death exhibition at the Wellcome Collection, just up the road from the IHR. The exhibition shows highlights from the collection of Richard Harris; it is free but, on the Saturday afternoon I chose, there was quite a queue.

I particularly enjoyed the photographs in the exhibition but I didn’t notice any Victorian photographs of the dead. These have interested me since I first heard them mentioned in an essay by Stephen Jay Gould. When photographs were an expensive luxury families often had no likeness of a relative who had died and so would have the corpse photographed as a memento, as in this example at the Musee D’Orsay. Stranger, and more culturally interesting, was the practice of propping up the corpse, or otherwise arranging them in the closest simulacrum of life that could be managed. I wonder if this was done for practical reasons – that it was the best way to photograph a person effectively when you had cumbersome equipment and long exposure times. This example, with parents holding their dead daughter, clearly memorialises their love for her: 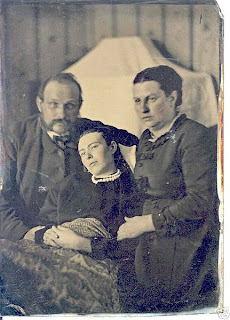 This might seem alien now but different ages have had fascinating particular ways of memorialising the dead. In Greek stelae, there was a fashion for depicting the dead person with their living relatives, often shaking hands or making some other gesture of leave-taking. The death mask, a practice that seems to have fallen away with the coming of photography, is particularly touching when taken of a young person – such as the death mask of the 25-year-old Keats, which you can see at the Keats House Museum in Hampstead.

Photographs of the famous in death do not surprise us so much. Perhaps this is because we expect the famous to be minutely documented to satisfy our curiosity. Man Ray, who did not know Proust, went to photograph the celebrated writer two days after he died – nowadays you can find the snapshot pinned to a wall on Pinterest.

There seems to have been little written on memorial photography. In the histories of photography I have looked at there is a brief mention or none at all. The best list of references I can find is seven items on Copac, under the category Postmortem photography – history.

Perhaps in time phenomena like Facebook memorial pages will come to seem eccentric too. The Facebook example illustrates how the question of death in the digital age brings problems of its own; as one blogger, following the sudden death of her husband, has chronicled, we should all be planning for access to important online accounts for those who have to sort out our affairs if we die.