One of our summer interns from Leicester University, Charlotte Ward, writes in a guest post: 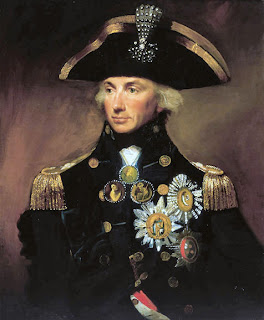 For my BA dissertation I am looking at ‘Crime and Punishment in the British Navy and Army during the wars with France from 1793-1815’ so I decided that I would create a connection that was linked to this topic. As this was my first connection I thought it would be a good idea to research a well-known person as this would probably mean that it would produce more results. I decided to choose Horatio Nelson, the famous admiral who led Britain to victory at sea with battles that included the Nile, Copenhagen and Trafalgar. For my initial search I typed ‘Horatio Nelson’ into the person bar and set the years to 1793-1815, the years of my dissertation topic. Even though Nelson died in 1805 at the Battle of Trafalgar I thought that there might be a fair amount about his legacy including documents, images, memorials etc that were made after his death. This search produced 227 matches across three databases. 209 of these matches came from the British Museum Image Collection Database where, as I previously stated, many of these images are from after he died to commemorate his life and achievements.

As Nelson’s exploits during the Napoleonic Wars are famous and well known, I thought it would be interesting to see if anything from earlier on in his naval career or indeed in his life would come up in a search. So I tried a new search and changed the dates to encompass the entirety of his life (1758-1805). This produced 135 matches across four databases. One match I found particularly interesting, seeing as I am researching an area of crime and punishment, was from the Proceedings of the Old Bailey Online. Captain Nelson had been a character witness at the trial of a man called James Carse who had been accused, and was found guilty of, the murder of a woman. Nelson describes the man as being ‘melancholy’ and ‘quiet’ and believes that because he was not a drunkard or used to drinking so he believed that as the man had been drinking that night he was probably not used to the effects of the alcohol and that this might be to blame. Nelson also makes a very salient point about the nature of crime in the navy stating that ‘it seldom happens that any man can serve four years without being guilty of some sort of offence’ which is something I will consider in my dissertation. Also, rather interestingly, one of the lawyers was William Garrow someone else whose life and exploits I am especially interested in.

Connected Histories is a fantastic resource. I have discovered things I may not have thought to look at and probably would not have come across. It is great to be able to save things that you find in an easy to access list as I often find that when I am researching things online I often have too many tabs open or I lose and forget certain pages I have visited. Although many of the databases are not free to use (though thankfully like many universities mine is signed up to all of them) it does allow you to see the sheer volume there could potentially be on a certain topic, person or place. Those that are free to use make for fascinating reading and provide a glimpse into online historical collections.