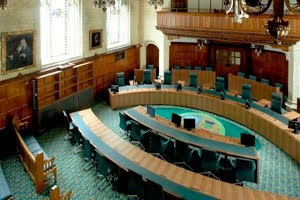 What is the heraldic emblem of Northern Ireland? I learned the answer on a recent tour of the UK Supreme Court, whose logo represents the constituent parts of the UK with their emblems.

The court came into existence in 2009 and immediately aimed to be more accessible and informal than the previous hearings of the Law Lords in the House of Lords: the judges don’t wear wigs or robes and the lawyers don’t have to either. The carpeting throughout the building, which incorporates the aforementioned emblems, was designed by the pop artist Peter Blake.

In the photo above you can see how the old building (which used to be Middlesex guildhall) has been modernised. Court sittings are screened live by Sky.

But what surprised me was that there are no transcriptions of the court hearings. If you want to know what happened, as a lawyer or – soon – as a historian, you can get the DVD. I’m sure that provision has been made for, for example, hearing-impaired people, but this strikes me as a drastic change.

The law is an area of knowledge so bound up with the written word that in a recent collection on the digital humanities, it was suggested that it will be a driver for text mining:

“The present proliferation of legal texts on the Internet…renders the selection of relevant texts and cases next to impossible. We may expect that systems to mine these texts to find arguments that support one’s case…will end up doing much of the work.”
‘The Meaning and the Mining of Legal Texts’, Mireille Hildebrandt, p. 145
in Understanding Digital Humanities, ed. David M. Berry, Palgrave Macmillan 2012

Historians of English law from an earlier period have a rich new internet resource. Early English Laws, which launched last week, is a project to publish all English law documents up to the time of Magna Carta. As well as high-quality manuscript images there are, in many cases, transcriptions, translations and critical commentary. Here, for example, you can see the manuscript of Æthelberht’s code with a transcription to the right, but you can change the right-hand panel to commentary or translation just by using the drop down menu above – or you can click on the manuscript image to zoom in.

This is a work in progress, as editions are being worked upon by historians from around the world: the project is already impressive but it will become an increasingly vital source for the period.

And the heraldic emblem for Northern Ireland, in case you were impatiently waiting to find out, is flax – chosen to represent the long history of linen production in the area.