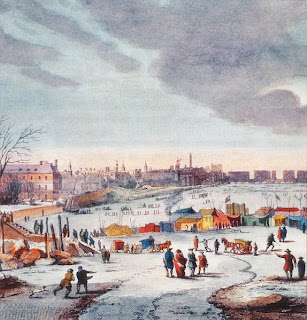 It’s bitterly cold in most of the UK at the moment, with overnight temperatures lower than -10° C in some areas. However, there’s no prospect of the Thames freezing over just yet. A search of Connected Histories reveals that this was a not uncommon occurrence in earlier periods (“Thames” AND “frozen” produces 142,593 results). When it happened, it inevitably captured the attention of artists and engravers. There are 1,700 relevant images in the British Museum image database, for example. A wonderfully detailed woodcut from 1683-4, entitled ‘Wonders on the Deep; Or, The Most Exact Description of the Frozen Thames’ shows the frozen surface teeming with life, with market stalls, and boats converted into sleds. These are the events of the ‘last great Frost, which began about the middle of December, 1683, and ended on the 8th of February following’. A woodcut depicting the frost fair of 1814 reveals a similarly busy scene, with fires and cooking pots on the ice visible in the foreground. However, the situation is rather more precarious than in the earlier example – the ice is clearly beginning to break up, and one figure is shown falling through up to his waist in freezing water. A drawing of the great frost of 1789 shows an almost Antarctic prospect, with large ships trapped and anchors lying on top of jagged and broken ice.
Other sources, too, are rich in detail. A coroner’s inquest from 1795, for example, indicates what might happen when the weather wasn’t quite cold enough:

James Edwards on the eighteenth day of February in the year aforesaid at the Parish and in the Liberty aforesaid [St. George Hanover Square, Liberty of the Dean and Chapter of the Collegiate Church of St. Peter, Westminster] To Wit on the certain piece of Water called the Serpentine in Hyde park (then being frozen) being then and there scating It so happened that accidentally casually and by Misfortune the Ice gave Way & that he the said James Edwards fell into the Water and in the said Water was then and there suffocated and drowned: Of which said suffocation and Drowning he the said James Edwards then and there instantly died

And it was not just in England that such severe weather conditions prevailed. A ‘Report on Tables of Deaths’ in the 1851 census of Ireland has multiple entries relating to extreme cold:

AD 1739-40 A great snow and frost in England. Great snow in Spain and Portugal. The Zooder Zee was frozen over. The frost was common to all Europe …

1766 “A frosty spring.” The greatest fall of snow ever remembered: in some places it was more than fifteen feet deep; numbers of sheep and several travellers were lost [in that order!]. It was common to England.

1783-4 The Liffey, Thames and also all the rivers in the interior of Holland were “covered with solid ice.”