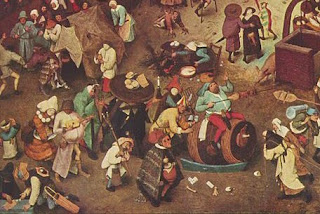 The history of Lent is complicated. It touches on two other complicated subjects: the history of early Christianity and calendrics. Anyone who would like an in-depth treatment of the latter, with a bit of the former thrown in, should turn to the second volume of Anthony Grafton’s erudite intellectual biography of Joseph Scaliger. Scaliger was the most famous intellectual in Europe in his day and he devoted much of his life to a now-forgotten subject: the reconstruction of ancient chronology. Pagan and Christian festivals were central to that study.

The early history of Lent is usefully summarised in the Catholic Encyclopedia. There is no evidence for early Christians keeping a Lenten fast. Tertullian, for example, doesn’t mention it in his tract on fasting. It may be that when the fast did begin it was 40 hours (to mark the period in which Jesus was thought to have been in the tomb) rather than 40 days.

The Oxford Companion to the Year explains that “By late antiquity the prevailing Western custom was to keep six weeks of fast (excepting Sundays)…the tithe of the year”. The fasting diet seems to have originally excluded meat and dairy, but this was gradually relaxed, especially if those wanting exemptions could pay: the Butter Tower at Rouen Cathedral is one example of how much money was raised from those who wanted to keep up their dairy intake.

In Elizabethan England the government was torn between deprecating fasting as a Catholic practice, and advocating it in an attempt to support the fisheries. Keith Thomas says in Religion and the Decline of Magic that it was forbidden to get married during Lent (although you could, as usual, purchase a special licence). Puritans attempted to get these rules repealed in parliament but failed and they “were still being enforced at the beginning of the eighteenth century”. Not only marriage was off limits:

The Lenten fast may have originally coincided with a shortage of food at that time of the year, but it acquired other less utilitarian connotations. It was regarded by many Catholic clergy as an improper time for marital intercourse, and the findings of modern demographers suggest that the Lent period in early modern Europe may have been marked by fewer conceptions than at other times of the year.
[Religion and the Decline of Magic (1997) p.620]

Protestants, Thomas goes on, campagined against much of the traditional Christian calendar. Books such as Joshua Stopford’s Pagano-Papismus (1675) located the festivals in pagan antecedents: Shrove Tuesday was merely Saturnalia in disguise. This may come as a surprise to those eating their pancakes today.