I’m struck by the fact that in Volume 8 of English Historical Documents, both the documents which deal with Titus Oates concentrate on his physical appearance. Roger North’s Examen (document 397) describes him like this:

He was a low man, of an ill-cut, very short neck, and his visage and features were most particular. His mouth was the centre of his face, and a compass there would sweep his nose, forehead and chin within the perimeter. Cave quos ipse Deus notavit. In a word, he was a most consummate cheat, blasphemer, vicious, perjured, impudent and saucy, foul-mouthed wretch…

It is taken for granted here that physical ugliness is connected to moral ugliness, and the two ideas are linked by a Latin tag – ‘watch out for those God has marked out’ – which suggests that the former is divine judgement for the latter.

Oates (1649-1705) was the principal informant for the ‘Popish Plot’. The so-called plot was a fabrication which engendered anti-Catholic hysteria and led to the executions of a number of people (including Richard Langhorne, who I mentioned when blogging about banking failures): Oates’s false evidence helped condemn them.

The second document on Oates, number 398, is an excerpt from Absalom and Achitophel. John Dryden was a Catholic convert and in the poem, a witty commentary on the Duke of Monmouth’s rebellion, Oates appears as Corah, and again his appearance is the focus:

Sunk were his eyes, his voice was harsh and loud
Sure signs he neither choleric was, nor proud
His long chin proved his wit, his saintlike grace
A church vermilion and a Moses face.

In their edition of Dryden’s poems, Paul Hammond and David Hopkins quote several more unflattering descriptions of Oates, including this one by the Jesuit John Warner:

his face was flat, compressed in the middle so as to look like a dish or a discus; on each side were prominent ruddy cheeks; his nose was snub, his mouth in the very centre of his face, for his chin was almost equal in size to the rest of his face…The rest of his figure was equally grotesque; more like a beast’s than human, it filled people with contempt.

This is beginning to look familiar, particularly the implausible claim that Oates’s mouth was the geometrical centre of his face. I don’t know if any of these writers ever saw Oates, but images of him circulated (see here for some examples) and it is a well-attested phenomenon that memories can be rewritten by subsequent information.

Allied to this, it was a commonplace of the time that the ugly are likely to be morally bad, as in Bacon’s essay ‘Of Deformity‘:

Deformed persons are commonly even with nature: For as Nature hath done ill by them; So doe they by Nature: Being for the most part, (as the Scripture saith) void of Naturall Affection

The only picture I have seen that looks like it was done from life doesn’t quite agree with the canonical idea of ugliness. True, Oates is no Clooney, and, true, it might be flattering the sitter, but it’s a different view of Oates: 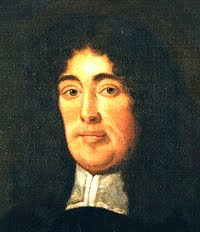 Unfortunately for fans of Oates, he does seem to have been genuinely morally ugly: Alan Marshall’s DNB article on him concludes:

For a time Oates succeeded beyond his dreams and was genuinely honoured as the saviour of the nation, but the sordid reality of his life in which there were no great secrets to uncover, only back alley meetings, stealing, begging, and poverty, vice, fear, and hatred, and above all failure, soon caught up with him.