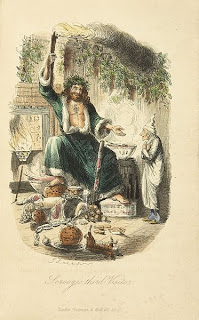 Unsurprisingly, the term ‘Christmas’ appears frequently in the resources indexed by Connected Histories – 58,644 times to be precise. The search results include a significant numbers of people with the surname Christmas, from the Leicestershire vicar Henricus Christmas to the wonderfully named Priscilla Swift Christmas, who was unable to say precisely much money had been stolen from her in 1847. The vast majority of entries, however, are of course references to the festival itself. There are, for example, some lovely images in both the British Museum Image Database and the John Johnson Collection of Printed Ephemera. Among those in the BM collection is a boisterous 19th-century Father Christmas presiding over a plum pudding which doesn’t seem unduly worried about its imminent demise. Quite what the sinister ‘bogie’ figure is doing towards the back of the image is another story. The illustrator Hablot Knight Browne is better known as ‘Phiz’, whose drawings accompanied so many of Dickens’s works. In contrast, this Madonna and Child with Gallows, a woodcut by Eric Gill (1916), is starkly beautiful, undercutting the joy of the birth with a hint of what’s to come. There are many other Gill illustrations in the collection, most designed for the book ‘Adeste Fideles, a Christmas Hymn’. Much more ‘traditional’ is this 1874 design for a Christmas card by Walter Crane, with its bright colours, children and holly.

The Proceedings of the Old Bailey include a number of Christmas-related thefts, for example Charles Henry Thwaites was sentenced to eighteen months’ hard labour after pleading guilty to ‘stealing, whilst employed under the Post Office, a post letter containing a hat-pin, the property of the Postmaster-General. Also, a post letter containing a silk handkerchief and a Christmas card. Also to stealing a letter containing a pocket Bible, the property of the Postmaster-General’. Similarly, one John Shepherd was stopped by a watchman at 1.45 am on Christmas morning, with ‘7 lbs. weight of lead pipe, value 1s.; 1 brass cock, value 10d., and 1 screw-plate, with taps, value 6s.’ under his coat. Pleading poverty, he was recommended to mercy and imprisoned for only six weeks. Some things didn’t stop even for Christmas!