The examination and torture of Guy Fawkes 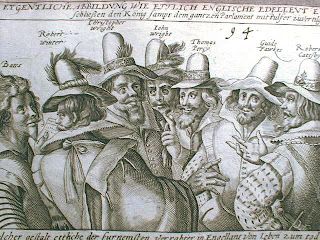 The gruesome fate of Guy Fawkes after the failure of the Gunpowder Plot can be traced in detail in the early modern sources published through British History Online. The richest of these is the Calendar of State Papers Domestic for the reign of James I, which begins, innocuously enough, with the statement on 5 November 1605 (at the Tower of London):

First examination of GuyFaukes, under the assumed name of John Johnson. Particulars of his past life; served Thos. Percy; details of the intended Plot; refuses to reveal the names of the conspirators ….

Examination of John Johnson (GuyFaukes) as to the storing of powder, &c. in the Parliament cellar,-his connections abroad,- whether Mr. Percy would have allowed the Earl of Northumberland to perish, &c. He refuses to inculpate any person, saying, “youe would have me discover my frendes: the giving warning to one overthrew us all;” signed “John Johnson.”‘

and even on to the 7th, although more detail was beginning to emerge:

Examination of GuyFaukes. The conspiracy began eighteen months before; was confined to five persons at first, then to two; and afterwards five more were added, who all swore secrecy; he refuses, on account of his oath, to accuse any; they intended to place the Princess Elizabeth on the throne, and marry her to an English Catholic. Signed at the foot of each page “Guido Faukes.”

Further investigations were, of course, being carried out as Fawkes’s interrogation went on, and the calendars are full of wonderful detail:

Information, that Faukes lodged two months ago, with Mrs. Herbert, now Mrs. Woodhouse, at the back of St. Clement’s church. Percy, the two Wrights, Winter, Catesby, and others had secret correspondence with him there. She disliked it, suspecting him to be a priest; he was tall, with brown hair and auburn beard, and had plenty of money.

Early on 8 November, Guy Fawkes continued to hold out:

Sir Wm. Waad to Salisbury. Faukes is in a “most stubborn and perverse humour, as dogged as if he were possessed.” He promised to give a full account of the Plot, but now refuses. Lord Arundel, Sir Griffin Markham, and one Tresham, long a pensioner of the King of Spain, are suspicious persons.

Later in the day, however, interrogation and torture finally yielded results:

Deposition of GuyFaukes. Thos. Winter first proposed a conspiracy to him; Catesby, Percy, and John Wright were next taken into the scheme, then Chris. Wright, afterwards Sir Everard Digby, Amb. Rokewood, Francis Tresham, John Grant, Rob. Keyes, and many others. Details of the Plot, the same as in the examinations.

There is an accompanying note that:

On the 10th, this declaration was acknowledged before the Lords Commissioners, and is signed in a tremulous hand “Guido.” The signature is supposed to have been extorted by the rack, and the prisoner to have fainted before completing it.

In December, a letter records that:

Faukes confessed nothing the first racking, but did so when told “he must come to it againe and againe, from daye to daye, till he should have delivered his whole knowledge.”

It’s not hard to see why he would have revealed details of the conspiracy and his fellow conspirators. The end was, of course, inevitable, and the Cecil Papers record in February 1606 that:

For our occurrences here, 8 of the principal traitors, Sir Everard Digby, Robert Winter, John Graunt, Tho. Bates, Thos. Winter, Ambrose Rookewood, Robert Kaies and Guy Faukes, have been arraigned, condemned and executed; the 4 first on the west end of Paul’s Churchyard, the others at the Old Palace at Westminster. Most of them confessed their offence against God and this State; some few, and especially Graunt, did obstinately hold that this late action was no sin against God; but all died true Roman Catholics.

You can find the full story of the investigation and its wider consequences at British History Online by searching for Guy Faukes.