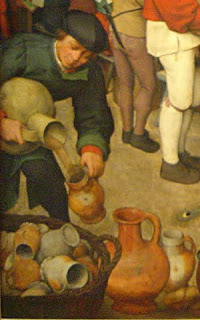 The reputation of English wine has improved dramatically in recent years, and even some world-class wines are being produced, but in general England is not thought of as a centre of viticulture.

So it’s not surprising to find that in London in 1364, at the tavern of Walter Doget, St Leonard’s Eastcheap, one John Penrose was found guilty of selling red wine that was “unsound and unwholesome, in deceit of the common people” [English Historical Documents, volume 4, document 616].

In November of that year Penrose was sentenced to a year and a day in prison but, for some reason, the judges (there were four of them) changed their minds about a week later, and instead ruled:

that John Penrose shall drink a draught of the same wine which he sold to the common people; and the remainder of such wine shall then be poured on the head of John Penrose; and he shall forswear the calling of a vintner in the City of London for ever

There are some excellent wine pubs in London today (I’m quite fond of the Princess Victoria in Shepherd’s Bush) but there are also publicans who, while they may not deserve a year and a day in prison, might do well to forswear the calling of a vintner for ever.