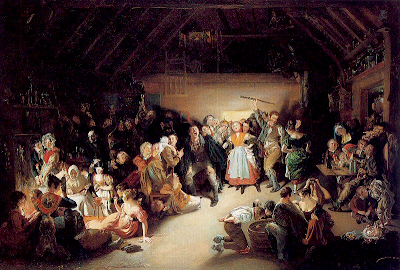 A search of Connected Histories for the word ‘Halloween’ produces only 13 results for the whole period 1500-1900. Similarly there are only 15 mentions of ‘All Hallows Eve” – with all of these simply referring to it as a date (for example in an almanac). The first entry, from the British Museum image database, is a rather lovely printed broadside from 1830 which reproduces Robert Burns’s poem ‘Halloween’. The subtitle notes: ‘[Halloween] thought to be a night when witches, devils, and other mischief-making beings, are all abroad on their baneful midnight errands; particularly those aerial people, the Faires [sic], are said on that night, to hold a grand anniversary’. The accompanying woodcut shows revellers gathered round a roaring fire. The Scottish theme continues with the Old Bailey Online, when a witness in a murder trial attested to his certainty about the date on which he saw one of the defendants: ‘I know it because it was Halloween in Scotland’.

The entry from the John Johnson Collection of Printed Ephemera is a prospectus for a newly published book, The Cabinet of Modern Art and Literary Souvenir, ed. A. A. Watts (1835). Among the illustrations listed, but sadly not shown, is one simply entitled ‘Halloween’. The remaining 10 search results are all derived from the House of Commons Parliamentary Papers. Several simply refer to Halloween as a date on which rents or other payments were due, while one is in fact talking about ‘the Halloween Arabs – a sub-tribe of the Rufaa [Egypt]’. Several, however, are of more relevance. Two annual reports of the General Board of Commissioners in Lunacy for Scotland (from 1867 and 1871 respectively) note the festival being marked in asylums: ‘in winter there are seldom fewer than two public in-door amusements weekly, and at these strangers are always present while at the more important festivities; such as Halloween, harvest-home, Christmas, etc., provision is invariably made for 50 guests’. The same is found to be true for ‘lunatic asylums’ in Ireland. The most unexpected result is from the resignation letter of Sir Peregrine Maitland as Commander-in-Chief at Madras. In a discussion of celebrations at festivals in India, he remarks ‘Something of paganism may be traced in our English feasts of May-day and harvest home; something Druidical in the rites of Halloween; more that is catholic in the village mummeries of Christmas’. And that, rather surprisingly, is that!

Image: Snap-Apple Night, painted by Irish artist Daniel Maclise in 1833. It was inspired by a Halloween party he attended in Blarney, Ireland, in 1832 (Wikimedia Commons)