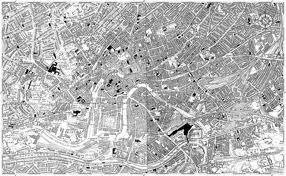 Rachel Hewitt’s new book Map of a Nation: a Biography of the Ordnance Survey (see here for full review) charts the story of this longstanding British institution from its inception as an aid to the subjugation of the Highlands in the mid 18th century to conclusion of the First Series one-inch map in the 1870s.

The OS was modelled on the Carte de France, or Cassini Map, whose surveyors’ travails are brilliantly described in Graham Robb’s The Discovery of France. Several came to a sticky end as a result of local suspicion of the motives of these agents of central government. These days the threats to cartographers come rather from new digital mapping technologies, which have meant the end of map printing at the Ordnance Survey.